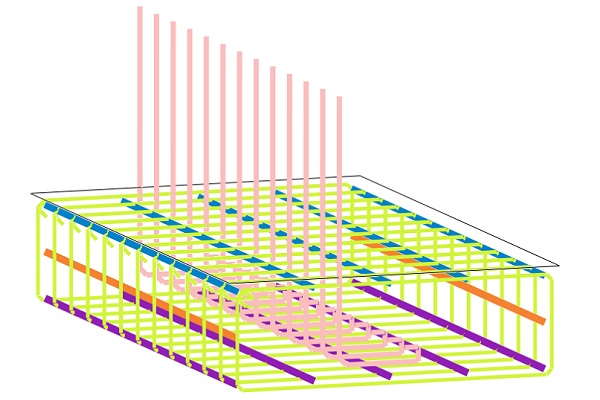 The global rebar steel market size was estimated at US$215 billion in 2018 and expected to grow at over 7% for the next five years.

It is easy to forget about the rebar market as the rebar is placed inside concrete and so is never seen, but the market size for Rebar is, for example, more than twice the size of the entire roofing market.

So the value of the rebar in any building underlines the importance of accurate rebar estimating. Estimators are typically under pressure to produce as many estimates as possible, which leads to estimators taking short-cuts resulting in disastrous consequences.

Under-quoting, so the quote results in a financial loss, or over-quoting so the company has no hope of being the winning bid are both common problems. In fact a cynic has once said that the lowest tender price is often the result of the estimator who has made the most mistakes.

Rebar estimating is about an estimator calculating the amount of rebar in a building or structure for quoting purposes. Initially the interest is only in pricing, so what is required by the estimator is the total tonnage of rebar, and also the number of bends as that will affect the price. Then, on wining the bid, the rebar and bending needs to be detailed so the rebar can be cut and bent before sending to site.

This method of storing the detailing as part of the initial estimate produces a very accurate estimate for quoting purposes, and on winning the bid, saves the cost of detailing later.

Modern estimating systems such as Exact Rebar estimate by the estimator drawing a model, in doing so the estimate is fast and accurate, but the real benefit is the estimator creates a 3D model for later detailing and cross checking.

The real bonus of the 3D Model is the estimate can be viewed from top, side and in perspective allowing a fast and simple way to look for errors. Large errors such as leaving entire beams out of the estimate become immediately glaringly obvious. The 3D model means that errors that could bring about the company to collapse are eliminated.

Moreover the 3D models can show minor errors as well. The rebar can be color coded, so not only do large diameter beams are drawn accurately to size, they are shown in a different colour. This will immediately show up inconsistencies across similar beams or slabs leading the estimator to pick up minor mistakes.

So the essence of modern estimating software such as Exact Rebar is not only to provide accurate estimates, but more importantly provide accurate detailing, and an alternative cross check, via a 3D model. Then the company can rely on the estimate as an accurate assessment of the work to be done.