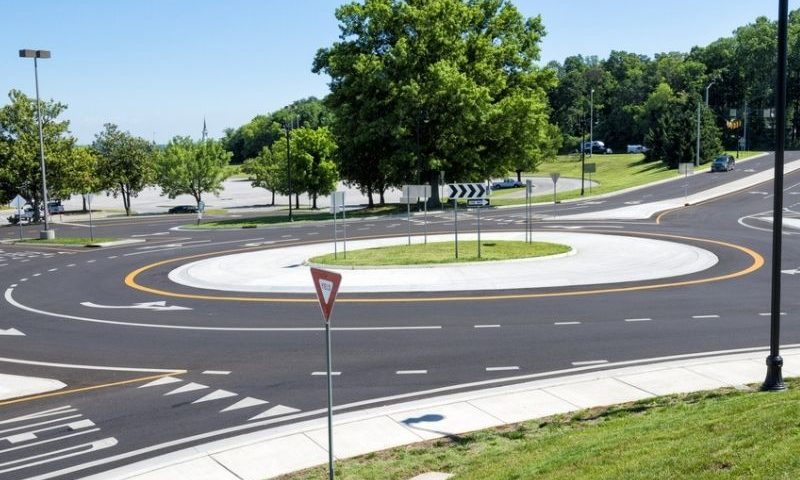 A lot of people think roundabouts are exclusively European or British, but the United States has hundreds of these circular features built into its roadways. They can look confusing at first and are often intimidating if you haven’t driven through one before, but it’s not as complicated as it looks. Here’s how to navigate a roundabout, otherwise known as a traffic circle.

Most roundabouts hold a single lane of traffic in their circle, making them easier to navigate. You’ll notice the circle long before you reach it, but there’s also a yellow traffic sign that will let you know you’re approaching one.

That sign includes the speed limit within the roundabout, which is typically slower than you were traveling beforehand. Roundabouts travel in one direction, too. So, check to your left or right for oncoming traffic before you enter.

These operate the same as any other roundabout but accommodate more than one lane of traffic. You’ll often find these connecting busier roadways, helping drivers save valuable time instead of turning all the way around or dealing with strangely built exits.

Like the single, your yellow traffic sign with indicate the upcoming roundabout and let you know what the speed limit is. When you find a safe gap in traffic, go ahead and enter while maintaining the correct speed. In both scenarios, you should use your turn signal.

If you’re in a multi-circle and need to change lanes, use your turn signal and yield to other cars in that lane. Changing lanes is often an important part of the process as you approach your exit. Other times, it can just help you save a little time by traveling faster.

You’ll need your turn signal again before exiting, so flip it on when you’re ready. Roundabouts usually connect to at least four exits, doubling as entrances for incoming vehicles in the other lane. Just like entering, you want to safely merge with traffic as you leave and head back onto the straight or curved road ahead.

Like any other roadway, accidents happen in roundabout. Since this is a circle, you’ll want to move your car out of the way if possible as it can be harder for other drivers to avoid. Assess the damage, call 911, and swap information like you would in any other accident.

Since people can become confused in a roundabout, especially if they’re new to this type of road, you might need to lawyer up in order to seek compensation or defend yourself in court. I takes a skilled legal professional with ample experience, like attorney Dan Rose, to help you make your claim in these situations.

Some people wonder how many time you can travel the circle in a roundabout. As it turns out, there is no nationwide law dictating the number of times you can circle around. Before you have a little fun, however, keep in mind that more than twice could be considered careless driving. This is especially true if you’re doing it on purpose.

The goal is to enter, travel, and exit. Don’t panic if you miss your exit, though. It’s perfectly normal. Just head back around and try to make your exit the next time. At the end of the day, driving safely matters more than missing an exit a few times.